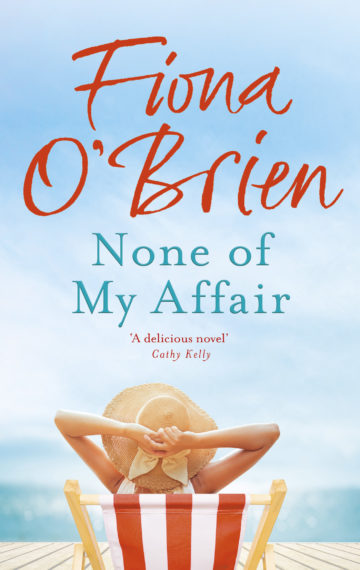 “A polished read with a lot of perceptive insight to the issues that women grapple with when faced with marital disaster…a sophisticated balance between glamour and depth makes NONE OF MY AFFAIR an involving read for the summer.” — Irish Independent.

Two marriages; two affairs; one hell of a wedding.

Jay and Frank Farrelly’s marriage works perfectly. So long as he shows up and she gets to show off – Frank can do pretty much what he wants.

Jay’s friend Carrie, married to serial adulterer Rob with three beautiful daughters, is tired of living a lie and vows that it’s finally over. But then Ali, their supermodel daughter, announces her plans for a glittering society wedding, forcing Carrie’s divorce plans to be put on hold.

When Excalibur, the magnificent yacht moored in Puerto Banus owned by Jay and Frank, is chosen as the perfect venue for the wedding, Carrie jumps at the chance to oversee things and spend some time with her artistic, reclusive eldest daughter Hope who lives nearby.

As Carrie and her tempestuous youngest daughter Stephanie settle in to their luxury villa, on Marbella’s Golden Mile, more than wedding plans begin to unfold.

Just what is eating Rudi Weiss, the troubled, devastatingly sexy South African skipper of Excalibur? And what is his obsession with Carrie’s new friend, the handsome and aristocratic Marques de Alba, Cordoba y Rincon?

Meanwhile, Frank’s latest indiscretion has led him out of his depth, and into serious danger. Jay realises she’s dealing with much more than just another bimbo, but is it too late and has Jay finally met her match?

From the flesh pots of the Port to the mansions of Marbella’s Golden Mile, a tangled web of intrigue and deception is unveiled. But as the wedding party descends on Puerto Banus , disaster strikes for the gilded guests…

An insightful look at life, marriage and infidelity, Fiona O’Brien’s new novel is warm, wise and very funny, proving even for the super rich – money can’t buy you love.

“If you like Jackie Collins then you won’t be disappointed.” — Daily Mail